So, Martin Goldfarb basically tells Liberals to attack Harper, not the Conservatives. He brings up the "right to choose" and more unsettling, he brings PM Harper's daughter into it.

Are the Liberal supporters so desperate that they are now reduced to attacking the man and his family, and not the party and policies?

Given that it appears that Martin Goldfarb is an old Trudeau relic, maybe it's a good thing that the Dion Liberals have left him on the outside looking in.

Oh, by the way, PM Harper is always holding his daughter's hand. To accuse him of being a bad father is really stooping to a low point. But they did it last election with this picture: 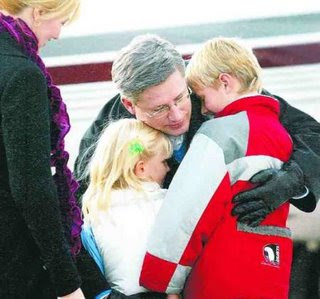 Remember? The "experts" said Ben wasn't hugging his Dad and that was a problem. Well, don't do it this time Liberals/experts/lefties....Canadians have seen enough of the Harper family to be protective of them. Leave them out of this election.

Go negative all you want on the party and it's policies, but leave the Harper family alone. Funny how Liberals accuse PM Harper of being too close to Bush, and then they turn around and recommend using American style election campaigning. Sad really.
Posted by hunter at 12:09 AM

You know, I was wondering what ever happened to that professor from The Hillarious House of Frankenstein, apparently he's working for the Liberals now.


What a desperate bunch, well at least they still have Garth, oh, wait a minute.....

I couldn't believe it when this idiot said that "Harper doesn't even hold his daughter's hand, for God's sake".

Let's see - isn't Rachel about 9 now. Find me a 9 year old that like to hold her dads hand EVERY time they walk down the sidewalk.

What a friggin idiot this guy is - the really, really sad thing is that a segment of the population will believe everything he says and vote Liberal.

Are the Liberal supporters so desperate that they are now reduced to attacking the man and his family, and not the party and policies?

Pretty hypocritical coming from a bunch that published a website featuring a bird shitting on the leader of the Opposition.

The PM has attacked Dion's family?
Could please provide an example of this?

As stated in a US funny:
If Dion can't take a little puffin poop,
how will stand up to Putin poop?

Of course, using family members as leverage against the PM has been tried before..

Remember how 'bad' a father he was, when he shook his boy's hand after walking him to school?

Perhaps leftists are just embittered old ninnies, who avoided having children out of fear that their maternity dresses would not match their Birkenstocks.

I wouldn't worry too much about comments from "Bug Boy" Jeff. I am sure that the vein in his forehead is about to explode any minute from the disappointment his thieving party is burdening him with.

Platty! I used to love that show! Don't attack The Professor! He was actually smart.

What Dion's campaign reminds me of is Brucy. Dead as a door nail.

And what happened to Bugboy?

Just another example of a Liberal fabricating stories in an attempt to explain the Liberal parties despicable behavoir.

I see one hit wonder Jeff has been busy with Conservatives blogs. Hit and run hey Jeff??

I said leave families out of it. This guy wants nasty, that's what Liberals do best. No facts, just smear.

As stated in a US funny:
If Dion can't take a little puffin poop,
how will stand up to Putin poop?

He didn't even know about the puffin poop until some reporter asked him! He doesn't spend all his time trolling the CPC's silly websites. "Can't take it". Sheesh! What a bunch of silly people here.

As for Putin, Dion is nine days older, so they already have some common ground. Dion is a statesman and he'll do just fine.

Dion is a statesman and he'll do just fine.

I agree 100% ls, when the election is over and Stephane is safely put back into his classroom, he will do just fine.

"Everything is OK Stephane, it was just a dream, just a really bad dream..."

The PM has attacked Dion's family?
Could please provide an example of this?

"Citoyen" Dion holds French citizenship because his mother was born in France. He has stated he will renounce that citizenship if it becomes necessary.

So every time you call him that (and many BTs do, you are attacking his family.

I agree 100% ls, when the election is over and Stephane is safely put back into his classroom, he will do just fine.

You are agreeing with yourself and your straw man statement of course.

Like I said, what a bunch of silly people here.

Not sure if you can read or not there ls, the question asked was in regards to the PM attacking Dion's family. Nice try though....well, not really.

Not sure if you can read or not there ls, the question asked was in regards to the PM attacking Dion's family.

With this PM and his fanatical message control, any attack by a CPC member or a BT is an attack by the PM. That's the problem with being an autocrat. You have to wear anything your trained seals say or do.

Yes I read the comment. Dion is not attacking the PM's family, yet you treat any kind of attack on the CPC or PM as being from Dion. Vast conspiracy and all that, right? It is your people who politicize everything. Recall the disgraceful example of trashing the father of a dead soldier. Sparrow shrieked "But the dead soldier's father is a LIBRUL" and therefore is disqualified from criticizing Harper's "abandon Afghanistan" election ploy.

Wow, talk about liberal logic at it's finest. Twist it a little more ls, again, bugboy is saying that the PM has been attacking Dion and his family for the last two years.

Since you are here standing in for the bug, how about you provide the link to any evidence of the PM attacking Dions family.

Yes Liberal Supporter, as Platty says, how has PM Harper attacked the Dion family, like Jeff suggested and never backed up?

And as those nasty facts slap them across the face, ls and the bug get lost in the wilderness.....

I'll bet you anything that Ben Harper told his dad to not hug him in public when he went to his first day of school in Ottawa. The kid is a normal boy - no kissing or hugging in public. Yet, the media and the Libs made a meal out of it. His children and his relationship with his children should and must be off-limits.