Get A Life Lefties! You Sick Little Trolls!

Because of the filthy language used by Liberal progressives, I have had to put my blog on comment moderation, again.

CAUTION! Profane language for one time only, to prove a point about lefties and their oh so progressive ideas about female Conservative bloggers. Question is, should I be calling the police on this? I sort of understand how Sarah Palin feels. Slimy people who are more interested in money and smear, than their own country, sad really.

I often get swarmed by trolls sent over here by a particularly obnoxious Liberal blogger. Sometimes the trolls behave, but I have had to put my blog on moderation numerous times because of disgusting language and attacks on mainly my female posters.

When I put comment moderation on, the trolls yell about "freedom of speech" and how I am denying them their rights. So, I thought my readers might like to see a small sample of why I have to put comment moderation on. It's a great glimpse into the lefties progressiveness or lack there of. Name calling and swearing is the order of the day. (Click on them to expand)

And here is a blast from the past:

These were all comments left on my blog that did not make it through the comment filter, until tonight. I only show them now because the trolls hate being put on comment moderation. Notice how liberal supporter mocks me for not being able to publish his comment? Well, hello, you wrote it on my blog, so, hey I can publish it, that's what you wanted wasn't it? Why else would you comment here?

So in answer to CC's comment, that I did publish: 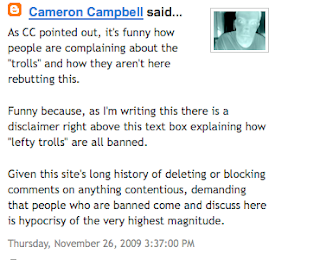 First off, the only CC to post on my blog in that thread was you. So are you talking to yourself, or did you come here from some lefty blog that thinks swearing is normal and the owners initials are CC?

Secondly, if you trolls ever had anything interesting or constructive to say, maybe your comments would get posted.

I try to stay away from even acknowledging the trolls, but their whining about their comments being deleted from my blog, when they clearly abuse the rules, is just too much to ignore.

So comment moderation stays on for now. Just thought some of you might like to see a little behind the scenes action. Oh... and trolls, never ASSUME that just because your comment doesn't get posted that it has been deleted. It might be lurking somewhere, just waiting to see the light of day. Nice language lefties, it really makes you look oh so intelligent, progressive, and mature.
Posted by hunter at 11:04 PM

I'm guessing the "CC" he is referring to is Canadian Cynic, one of the most asinine people I have ever had the displeasure of running across on the internet.

I had a few trolls attempt their madness on my blog. I just answered politely, honestly and factually. When they couldn't reciprocate, I merely informed them that further posts would be deleted until they made an apology.

Tired Guy loves to call me a troll when I post on Liberal sites.

And ever since he started posting back when he was still an NDPer, I have not heard a single intelligent comment from him . . . just cursing those who have opposing views.

My friend had a name for people like him and his (now) leader Iffy.

Oh... and trolls, never ASSUME that just because your comment doesn't get posted that it has been deleted.

I never have. I know how the Internet works.

They will never shut their filthy, lying mouths because they are genetically incapable of doing so.In their world, there is no dissent nor differing of opinion.

Drones, all of them.

I like your blog - carry on and manage it as you wish! The rules are clear and some jerks violated their privilege to share your space.