Someone Is Out Of Touch!

Even NDP rural MP's understood the importance of getting rid of the long gun registry, only the Liberals were out of tune and one NDP'er. 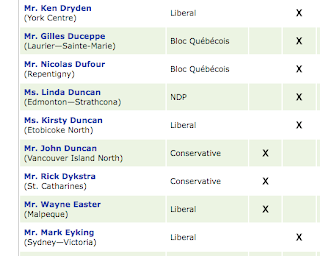 Linda Duncan, MP for Edmonton Strathcona voted against the bill. How out of touch is this MP? She has no clue what her constituents want or she just blindly ignores what they want, I'm not sure which. Her opponent can make real hay out of her vote to support the gun registry. Edmonton might be growing into a big city, but what she fails to realize is that a lot of us like hunting and the deer meat supports a lot of families, who might otherwise go without.

It appears she is already nervous, so her vote against the gun registry is not going to help her here in Edmonton.

Linda Duncan was only elected because the Liberals and NDP joined forces to vote for her, even if they try the same stunt next election, the Conservatives will out vote both parties.

Linda Duncan, out of touch with 40% of her riding, will not ride again. One less pork barrel pension to be concerned about, she already has a great pension from the U of A. One is enough. Let the lady walk into the sunset next election, she is a do nothing greenie, in the land of individual's who respect independence, and free will. With her vote against all our farmers, she has sealed her own fate. So be it.
Posted by hunter at 11:33 PM

So? Last time I checked 40% was less than the 50% needed for a majority. What's your point?

While liberals bemoan the end of the gun registry its important to point out the support for keeping it is not about what is right, its about trying to retain some liberal legacy.
This law is one of the highlights of Chretien's time in office, what else can they point to as an accomplishment? That he killed da GST?
The point is that without the gun registry the Chretien legacy is very weak and leaves liberals with very few accomplishments to go to voters with to demonstrate what they will do.
BTW
I've seen some commentary in lib circles alluding to how they wish for a return of Trudeau in the form of his son.
The cautionary in this is one needs to ask two things. First just what it was that the elder Trudeau wrought that was actually beneficial, and second does the younger have the capacity to recognize the mistakes of his father?

Linda Duncan also came out in favour of the Suzuki/Pembina report calling for harsher taxes on Alberta's oil and gas industry.

But there is a method to her madness. the Albertans out of work, the more social assistance needed....and that's right up her alley, literally.

The only way PET jr would win in the west is to change his name and major plastic surgery.
Poll results for AB, in Calgary WRA is ahead of Stelmach, and has 28% province wide. Maybe Linda isn't the only one to be nervous.
By the time this gun bill get to the senate we might have a majority there, with the resignation of a lib senator.
My own opinion is fear of loss of the Senate was the major push for an election by the libs.

CPC can fight back with ads in the ridings of the 20 opps, again.

Libs will fight to keep Chretien's legacy alive, in committee.
What a lie. Who cares about the legacy of Jean Chretien?
It isn't his legacy.

Then you can explain how repealing the gun registry is "tough on crime".

"Then you can explain how repealing the gun registry is "tough on crime"."

These morons want to be able to carry guns Liberal Supporter. In a tough situation, there is nothing like a gun for calming someone down. Oh, and the bystanders that get caught in the crossfire -- it was probably their fault for being in the wrong place at the right time.

Right, ls. Because the gun registry really helps prevent shootings like L'Ecole Polytechnique.
Interesting. Is it your talking point that the long gun registry now has time travel capabilities? How would it prevent the crime that inspired its creation?

It prevented the Dawson College shooting, didn't it?
No it didn't. What's your point? The killer drove his car to the college too, and the car registry did not prevent it.

Should we scrap the car registry then?

Two of the three firearms used at Dawson were restricted weapons. Unfortunately, the government has not proposed to scrap the hand gun registry. Therefore, by your "logic", such crimes as Dawson College will continue to occur, since you believe the presence of the registry caused them.

So, do you or do you not, support scrapping the hand gun registry?

LS you just don't get the point. The point is a billion taxpayers dollars would have paid for a lot of police in our communities. Instead the Liberals spent the money going after hunters and farmers. It's the socialism that bugs us, making criminals out of honest people and doing nothing to prevent any gun crime.

It was a feel good Liberal plan to appear to be doing something, while funneling a billion dollars into businesses hands at the expense of ALL taxpayers, whether they were gun owners or not.

So, do you or do you not, support scrapping the hand gun registry?

"What's your point? The killer drove his car to the college too, and the car registry did not prevent it."

The point is, ls, that the use of a registered firearm to wound and kill people at Dawson College puts the lie to the argument that the gun registry prevents such incidents.

"Two of the three firearms used at Dawson were restricted weapons. Unfortunately, the government has not proposed to scrap the hand gun registry. Therefore, by your 'logic', such crimes as Dawson College will continue to occur, since you believe the presence of the registry caused them."

Registering a weapon doesn't make it any less likely that this gun will be used to kill someone, or used in the commission of a crime.

"She has no clue what her constituents want or she just blindly ignores what they want, I'm not sure which."

Yeah, well I guess you would know, since you live here and all.

40% of her riding may want the gun registry, but did you consider that maybe the other 60% don't?

wilson - it is cute the way you insult the people living in this riding. I do hope you go campaigning with the CPC candidate and tell people here all about your little theory. I am sure people here will be thrilled to learn that if we do not vote CPC it means there is something wrong with us, rather than something wrong with the CPC. That is always a winning election strategy.

Keep it up though - it is people like you who help convince voters to go with Duncan.

"This law is one of the highlights of Chretien's time in office, what else can they point to as an accomplishment?"

There was that whole getting us out of debt thing, but that is probably too painful for you to remember considering how Harper is performing in that area.

Then there is this:

There is more, but it is getting late.