I'm Sponsoring All My Relatives Now!

Hey Vlad, come on down! Let's open up our doors even further, why not let sponsors renege on their commitments? That's a great idea! I can bring in all my Ukrainian/Polish relatives and when they go on welfare, I can now wash my hands of them. Nice. 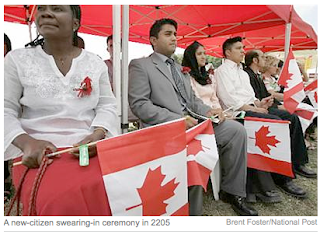 An Ontario court has ruled in favour of a group of residents who said they should not automatically be made to pay for relatives they sponsored to immigrate to Canada, despite having pledged to do so, in a decision that could have costly implications due to the number of such immigrants who seek social assistance.

The landmark ruling by the Ontario Court of Appeal says the provincial government must consider the circumstances of immigrant sponsors and use "case-by-case discretion" when deciding whether to demand sponsors pay back the money their family members collect.

Hey judges, how about the sponsors OWE Canada and Ontario payment for sponsoring a do nothing relative who wants to live the good life in Canada, on the taxpayers back? How about some fairness to the CANADIAN taxpayer? You judges ever think about that?

So, I sponsor someone, they come over, sit around on my couch, claim poverty and get welfare. I then go to the courts and also cry poverty, and the problem is solved. No one has to take responsibility for the new guy, except us taxpayers. We have to work hard and pay taxes so we can support those new immigrants. Does anyone see the problem here, or is it only me?

However, some legal observers said the ruling has pricey implications, since the Ontario government provides millions of dollars worth of social assistance every year to sponsored relatives, and a case-by-case analysis could carry a hefty administrative price tag.

So far this year, about 5,000 sponsored immigrants have applied for social assistance in Ontario, according to the Ministry of Community and Social Services, with a cost of about $56-million. About $45-million of that has been covered by the province and the rest by municipalities. A spokesperson said $13.7-million has been paid back. Ministry spokesperson Sandy Mangat said the government tries to come up with a voluntary repayment plan, and if all else fails goes to the Canada Revenue Agency to route tax credits to cover the debt.

What tax credits, they are on social assistance? Lawyers must love these judges, they give them a whole new avenue of money sucking from taxpayers. This is another gun registry in the making.

"The idea was to control abuse, because before this mechanism existed, there was a tendency for a small number of people to import family relations to Canada for the express purpose of taking undue advantage of our welfare system, chronic care homes, what have you," said Mr. Kurland. The sponsorship system made sponsors share the overall economic burden, which curtailed this kind of abuse.

He said the creation of a "case-by-case determination system" would create "humongous administrative overhead" and weigh down any collection system.

"It just begs the question, should we be having case-by-case determination for the relatively small number of cases like this? Or could we be a little smarter, and adopt the Quebec system where the sponsor gives a 100% guarantee to pay, with no excuses possible?" said Mr. Kurland.

Finally something I can agree with from Quebec, 100% guarantee to pay. These judges need to get their heads straight. I am so tired of bleeding heart lefties that are quick to spend my tax dollars. I am calling Vladimir right now to get him into the country, he will be thrilled to sponge off of Canadians with social assistance for the rest of his life. I have hundreds of relatives just like Vlad!
Posted by hunter at 10:05 PM

My view is, if sponsors can't pay, send them back.
And IRuby wants them to get pensions after 3 yrs.
Why can't these families send money to their people back home, instead of using the cdn taxpayer to give them a living.

Tax credits: someone on welfare is generally entitled to the GST credit and, if children are involved, the CTB as well. Social assistance is not taxable, but is part of net income which is used to determine eligibility for various programs. Ironically, someone on welfare may well get more GST than somewone working part time because net income is higher.

Let's just stop the refugee program completely for now, as we do not have the resources or jobs. Refugee programs should be reach out ONLY. Anyone else who shows up gets detained and deported.

We are so stupidly naive! The immigration program should be SERIOUSLY cut until we round up who is here now. No more Sharia-approved Somalian/Pakistani husbands for Canadian girls from back in the old country or fake cousins!

We need the best and the brightest families who do share our Canadian values, so let's be VERY picky! Unfortunately, we are not doing the right value tests for entry, and people LIE. We will soon be ruined, as are Britain and other European countries if we do not stop being idiots.

Ontario is gone to the dogs. It's now a Nanny Province. Did you expect anything better? With the large number of lefties in this province, this status was due to happen.